The Ruby community has lost a true luminary this week with the passing of Chris Seaton, staff researcher at Shopify and creator of the impressive and envelope-pushing TruffleRuby implementation. Chris and I probably met two dozen times without having a real conversation, but my friend Aaron Patterson worked with him:

As a college dropout, I’ve always felt underqualified. Embarrassment about my lack of knowledge and credentials has driven me to study hard on my own time. But Chris never once made me feel out of place. Any time I had questions, without judgement, he would take the time to explain things to me.

I’ve always looked up to Chris. I was at a bar in London with a few coworkers. We started talking about age, and I found out that Chris was much younger than me. I said “You’re so smart and accomplished! How can I possibly catch up to you?” Chris said “Don’t worry, I’ll just tell you everything I know!”

Brilliance takes many forms in this world, but this might be the best one.

My friend Nadia Odunayo is currently staying at my place and she relayed another story from RubyConf last week. She saw Chris find a quiet seat by himself. A moment later, there was a message broadcast on the conference Slack inviting anyone at the event to come and learn about how compilers work in Ruby. It was Chris. 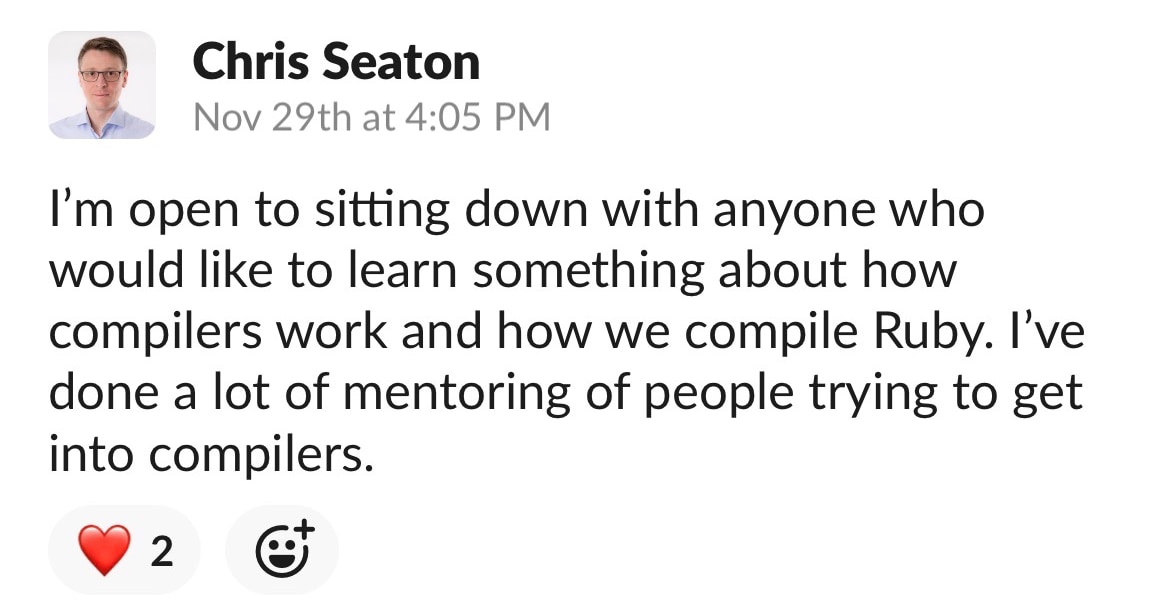 When someone of Chris’s stature in a community sits down by themselves, others infer that whatever they’re doing must be very important and they’d best not be interrupted. Chris may have been introverted, but he was cognizant of that dynamic and he chose to counter it by expressly inviting anyone at the entire conference to spend time with him. Meeting people halfway isn’t always far enough, so Chris went further.

I never made the effort to get to know Chris. His raw intellect intimidated me. So did his academic accomplishments. He brought so much rigor to his work that it made me feel like somebody who just play-acts programming on TV. I let my own ego get in the way of connecting with someone who was deeply committed to the same craft and the same community that has defined my own career. It’s a shame.

Rather than harbor regret that I missed out on the opportunity to know such a wonderful person, I’m committing to learn from that failure and strive not to repeat it.

To strive to be better.

To strive to be Chris good.

There’s no other way to say it: Ruby has lost an invaluable asset. And Chris left behind shoes too large for any one person to fill. As we emerge from grieving this loss, may we rise to the occasion and begin the work of filling those shoes—to redouble our investments in the future of Ruby as both technology and community. May it serve as one final gift from Chris to us. 💚

There's Nothing.new under the sun